Well I would like to wish everyone first of all a happy Easter and hope you all have a fab weekend.
I am very proud of myself as I managed to make 3 cards just in one day as I decided that I would have a crafty weekend :-)

2 of the cards that I have made are from the Hunkydory kits
The rose one is called shimmering roses
I got the Flowers in the window luxury foiled topper. And the shimmering roses card stock. I made this card just a bit smaller than A5 as I cut the topper too short so I accommodated it around the shimmering card stock.
The 2nd card is called through the arched window.
I used the floral midday sun shimmering toppers, and shimmering white flowers card stock and mounted it on to an 8x8 white card and I added a sentiment and a light pink ribbon. I copied the ideas from the crafting with Hunkydory compendium 2 magazine. I decided than rather buy their magazines every month they bring one out I buy their compendium magazine which is thicker and easier to store lol.
The third card I made was using the Crafterscompanion party paws cd, I made it into a double easel card as I made this into my wedding anniversary card. I used the decoupage, backing paper and the other embellishments from the cd. I added a few gem stones some flowers that I had and some gold peel offs too. Xx 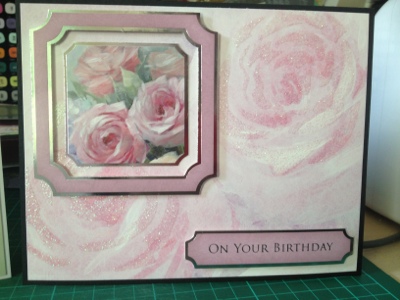 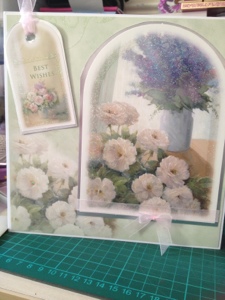 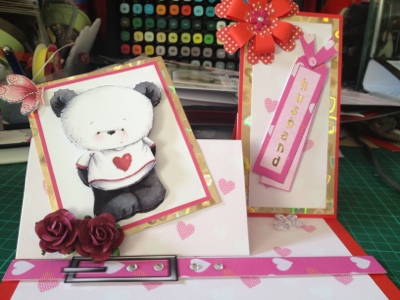 Having a quick play 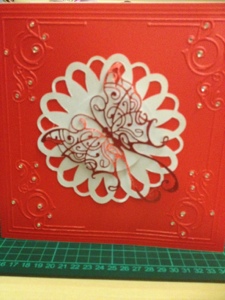 Well I do love Crafterscompanion products.
And I so had to make these cards after seeing Debbie Clough's blog.
I made the scalloped easel cards using the sizzix scalloped heart dies.
The Angelica one (fairy) I used the purple backing paper, glittered purple coordinations card stock, and I stamped Florence on to Neenah card stock and coloured her in using my spectrum noir pens. I added 3 flowers and the two butterflies came in the bamboo blockbuster paper kit.
Bamboo I coloured in using my spectrum noir pens and I cut 2 hearts to make it into a decoupage. The sentiment is also stamped and I used DR1 to colour the heart and stamped the sentiment on. I added red gems and also the butterfly as the finishing touch. 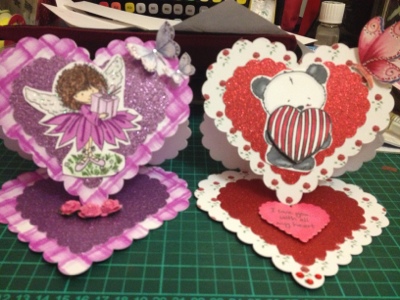 This weeks challenge is Easter at glitternsparkle.
The image is called Toby in pot from crafty sentiments. I coloured him in with my spectrum noir pens. And used glitter for the butterfly.
I used yellow pearlised card and made it into a stepper card. And used gold mirri card and cream coordinations to layer it. The sun flowers are made by using the die'sire large and small sunflower quilling die and the stamen.
The butterflies are stickers that I have had for a long time.
The sentiment is peel offs,
And I used yellow ribbon and orange gems. 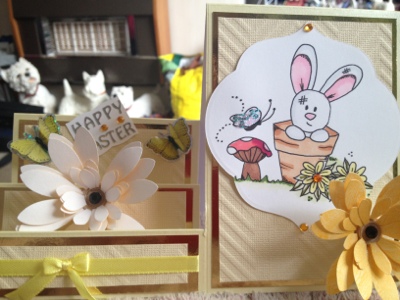 Well today I took possession of my Crafterscompanion blockbuster which I got from create and craft.
The stepper card I have done was copied from the inspiration sheet.
The little one I added some red feathers.
And lastly I used silver foiled love hearts acetate. Inside I used white pearlised paper. I added a yellow ribbon. The topper I put on using the best glue in the world collall. The decoupaged bamboo. And I added light green and yellow gems at the top. I so love bamboo. 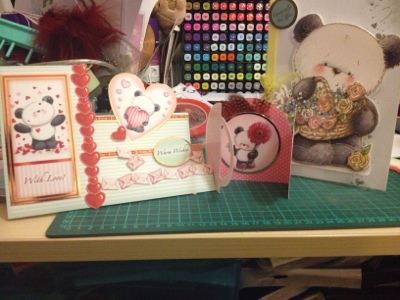 I enjoyed making this St Patricks Day challenge.
The image is called Ava St Patricks Day sitter from Bugaboo and I coloured it in using my beloved spectrum noir pens.
The St Patricks day sentiment comes from floppy latte.
I used light green glittered coordinations from crafters companion. Dark green ribbon and I made the bow using the free bow maker which came free with this months papercraft essentials magazine. And I also used 3 dark green gem stones. Please come and take part in this weeks challenge at: http://glitternsparklechallengeblog.blogspot.co.uk/2013/03/challenge-23.html 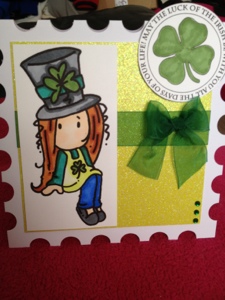 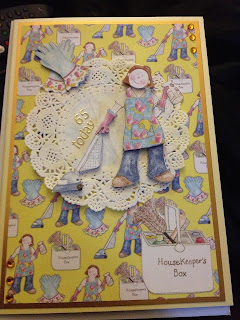 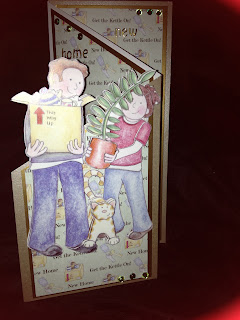 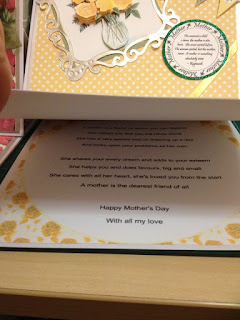 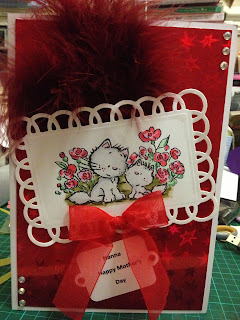 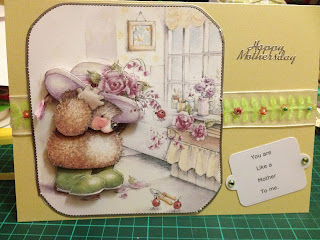 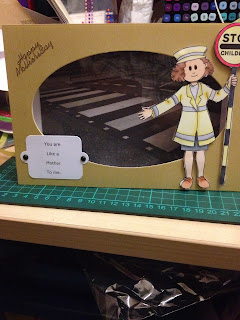 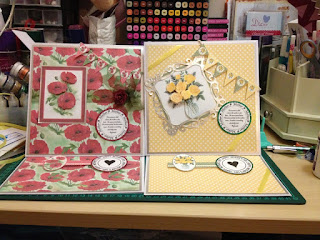 I was asked to make five Mother's day cards for a friend of mine. She wanted a mothers day cards 2 of which was for her mother and mother-in-law. So i used Nigel May's Blooming cd rom and made them both 8x8 easel cards.
Then she wanted a cat for her nanna so i used a cat stamp from crafters companion and coloured it in with my beloved spectrum noir pens. cut the picture out using a Diesire frame. and used feathers and gems.
Then she asked for 2x you are like a mother to me one had to have a lollipop lady omg i struggled for an idea so i googled for a lollipop lady image so i coloured in two images and coloured her in and cut it out to make a decoupage  then googled a road crossing and made into a picture frame which my friend loved.
And the last card i used from the country companions cd rom from docrafts and decoupaged it up.
Thank you for looking at my blog xx

sam
Hi there my name is Sam and I am 46 years young. I have been making cards for about 10 years now. I have a wonderful husband who is very supportive of my hobby and I usually ask him if my cards are ok. I have a son called Damian, and two west highland white terriers jock who we have had since a puppy called Dante and Now a new dog that we inherited called Henry and he is a shih tzi. I do love cardmaking more so the last 12 months and I love learning new techniques. I am on the design team for a lovely lady called Lynda Chapman who goes on the Create and Craft channel to bring her products for Creative Crafting World